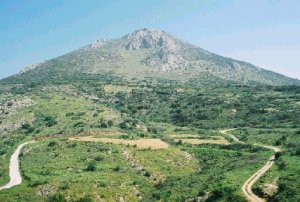 Greece is a country that seems to evoque very strong feelings. Athens, with its noisy streets and dirty skies, is hard to love. On the other hand, spend a few days on a remote island and we'd be willing to bet you'll find it hard to leave. Here's our guide to one week in Greece, from ancient archaeological sites to the best kebab shops this side of Turkey.

DAY ONE: Athens is, by all accounts, a chaotic city that you should be able to cover in a couple days at most (we spent one before the smog drove us out). Seeing the congestion on the roads and the sparse transport system makes one wonder if they will manage to pull off the 2004 Olympics. And if the country seems to be in a constant state of confusion it can be every bit as difficult for the traveller to figure out -- not least of all because few Greeks outside the main tourist spots speak English.

Your first step should be to get a good map of the city because once in the centre it's easily walkable, if you know where you're going! You can get these from the newstands, found on almost every corner.

The Acropolis -- you must get there early if you don't want to be overwhelmed by tourist throngs. A good plan, if you're getting an early flight into the city, is to kick things off by going there straight from the airport and looking for a hotel later. The guards are used to backpackers and will give you a place to store your luggage while you look around. You will almost certainly be approached by someone trying to sell you a guided tour, but these are expensive (when we were there they wanted £7/each) and the guide books sold on-site are excellent.

The Plaka -- if you come out of the Acropolis and turn right, continuing around the walls of the Acropolis, you will come to a set of stairs leading down into the old town of Athens, known as the Plaka. This is a good place to spend the night and also a nice place to dine. We stayed at Dioskouros House (Pitakou 6, 324 8165) where they charged us about £20 a night for a simple but clean room. As for food, we tried vegetarian moussaka at the Eden Vegetarian Restaurant (Lissiou 12, 324 8858) -- yummy! For snacks we ate at numerous cheap and cheerful kebab shops. For a few pounds you can fill up on very wonderful, authentic Greek food -- they're literally around every corner.

The Parliment -- a few minutes north of the Plaka are the parliment buildings. Here you can see the guards change, every hour on the hour. It's worth it, if for nothing else than the unique costumes they wear, complete with pompoms!

DAY TWO: We went to speak with the Oracle of Delphi on our second day, as well as enjoying a nice meal and a refreshing break from Athens. If you come during the high-tourist season however, you may find things a bit much because even in early April the tour buses were out in full force.

To get to Delphi, take the bus from the station at Liossion 260. You can catch a city bus to the bus station from the stops outside the National Gardens, beside the Parliment Buildings. The journey lasts about 3 hours.

When you get there you will be accosted by people trying to book you into their hotel. Although we're normally wary of this, we found a very nice, modern room this way at the Hotel Pan, just a couple minutes walk from the bus station. Walk up the lower, main street and you'll have no problem finding it. You can also try the tourist office, inside the town hall at 12 Friderikis.

From the bus station, you can easily walk to the site of the oracle but make sure to leave yourself enough time to explore since the grounds shut early in the afternoon. Always open are another set of lesser-known ruins just a little further down from the Oracle of Delphi site -- this is also your chance to pick fresh olives from the many trees that grow around the crumbling temples.

Beyond the Oracle, there isn't a lot to do in Delphi although if you want to make a 2-day trip out of it you might consider trying a hike on one of the many paths that lead into the mountains.

DAY THREE: This was mostly a transit day, trying to make our way to the other side of the Gulf of Corinth. From Delphi we took the bus to the port town of Nafpaktos. There we stopped for lunch, buying some goods from a local store. If you want a picnic, head down to the beach with your goods and relax on one of the picnic tables. After lunch we stopped to buy some chewing gum, which is where we met Mike. He owns the newstand right beside the bus stop and speaks impecable english (he went to uni in the US). If you're looking for tourist info this is the place.On his advice we took a taxi to the top of a hill, where an old fort stands. From there you can see across the gulf and explore the fort which is now abandoned. We then walked down the hill and headed for the ferry.

Buses run regularly to the ferry from the centre of town, buy your tickets from any newstand. The ferries go around the clock to the other side of the bay. Just jump on any boat that's loading up cars and buy your ticket on board from the man who'll come around once the boat gets going. The crossing takes about 20 minutes.

Once on the other side, take the bus going into Patras. No one sells tickets at the port, but you can get on the bus and buy your tickets when the bus stops at the hospital. You'll know when to get off to buy your ticket because the bus stops, the driver shouts, and everyone gets off, only to start piling on again a few minutes later.

Patras didn't impress, so we went straight to the train station on the waterfront and caught a train to the town of Diakofto so that we could take a ride on the town's famous cog-railway the next day. We stayed at the new family-run Hotel Limondies on the waterfront. To get there walk across the tracks at the train station and keep heading straight. The hotel is just before the beach.

DAY FOUR: Get up early in the morning and take the cog railway. Fourty-minutes up is the town of Mega Spileon. On its own it doesn't look that impressive but about an hour's hike from here is a monastery which should not be missed. Follow the signs from the train station, up into the hills. After about an hour you'll come to a main, paved road. Turn left and walk for about 10 minutes. There you will see the entrance to the monastery on the right.

This was, without question, the most amazing part of our trip. The monastery has been here for centuries and was founded after a miracle took place on the site. Over the years it's seen several fires and was targeted by the Nazis during the war but the monks have always rebuilt it.

At first we thought we might be intruding but when we got there an old, bearded monk took us both by the hand and was all too happy to lead us upstairs. He took us into the chapel where a painting done by St. Luke the Apostle hangs. It was lit only by candles on a huge, golden chandelier and two monks were chanting from a prayer book. There were works of art everywhere, covered in gold, and this was incredible. We stayed there for about 5 minutes, just listening to the prayers being read aloud.

Then the monk took us to a little museum where they have religious robes, art and bibles dating to the early part of the last millenium...amazing! They also have a room where bones from all the former head-monks are kept -- hands, skulls, you name it and it's encased in velvet in this room. Unfortunately, because of the language barrier, we didn't understand what our guide monk was trying to tell us but he did write some scriptures down for us to reflect on and will probably do the same for you.

We walked back down the hill, very refreshed and enlightened.

DAY FOUR: Having rested in Diakofto, we headed for the seaside town of Nafplion by train to Corinth and then the rest of the way by bus. When you arrive in Nafplion you will be almost on the divide between the new and old town. The much nicer old town is to your left and the charmless new area to your right. Stick with the historic side of town and you'll be well rewarded.